Thanks to Norma Jean at International Sex Work Foundation For Art Culture and Education for reaching out to Dr. Annie for D/17 PHILLY. We asked how she feels about us carrying the torch and memorial candle in 2017. She responded with a super Sweet tongue in cheek colloquialism on “it takes a village”:

“It takes a brothel to end violence against sex workers! Creating the first Dec 17 event was a group effort with Robin Few, Kimberley Klein, Michael Fowley, and myself. I am so very pleased that it is continuing.”

Photograph of Annie by Charles Gatewood 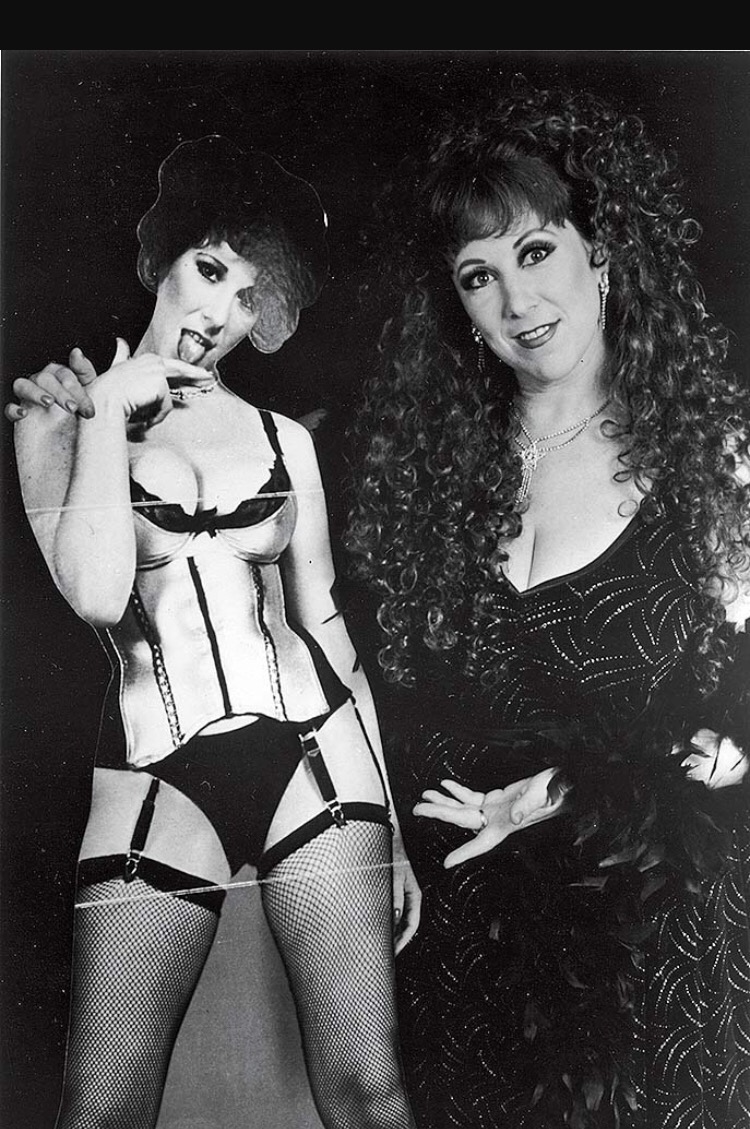 Letter from Annie Sprinkle: Green River Killer Gary Ridgeway said, I picked prostitutes as victims because they were easy to pick up without being noticed. I knew they would not be reported missing right away and might never be reported missing. I thought I could kill as many of them as I wanted without getting caught.” He confessed to having murdered ninety women. Sadly some Seattle prostitutes, their boyfriends or pimps, knew the Green River Killer was Gary Ridgeway for years, but were afraid to come forward for fear of getting arrested, or the police didn’t believe those that did come forward, or the police didn’t seem to care. Ridgeway’s killing spree went on for over twenty years. Violent crimes against sex workers go underreported, unaddressed and unpunished.

There really are people who don’t care when prostitutes are victims of hate crimes, beaten, raped, and murdered.  No matter what you think about sex workers and the politics surrounding them, sex workers are a part of our neighborhoods, communities, and families. 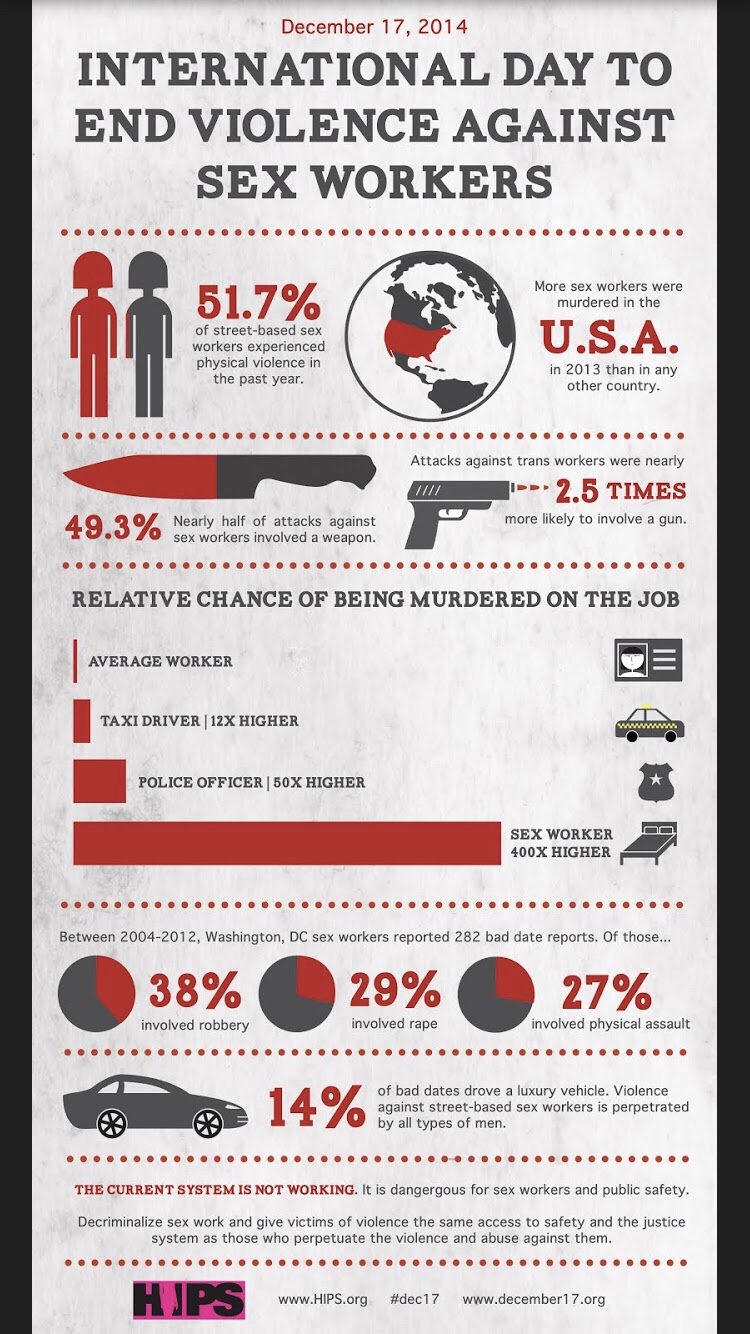 When Ridgeway was finally caught, I felt a need to memorialize my whore sisters that had died so horribly and needlessly. I cared, and I knew other people cared too. So I got together with Robyn Few, Founder of the Sex Worker Outreach Project, and SWOP members Stacey Swimme and Michael Fowley, and we claimed Dec. 17th as the International Day to End Violence Against Sex Workers. We invited people to do memorials, vigils, and their chosen kind of events in their countries and cities. We produced a vigil at San Francisco’s City Hall. To date, hundreds of people around the world have done dozens of memorials, actions, and events of all kinds, and the participation is growing. Won’t you join us? 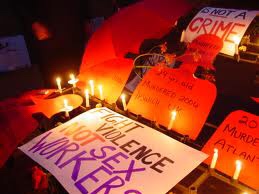 TEN WAYS TO PARTICIPATE IN INTERNATIONAL DAY TO END VIOLENCE AGAINST SEX WORKERS:

Each year when I attend a gathering on Dec. 17 for International Day to End Violence Against Sex Workers it is always a deeply moving experience. I take some moments to feel grateful that I worked as a prostitute for twenty years and came out alive and well. I remember those who didn’t survive and I fear for those who won’t until some real changes are made.

In San Francisco, we are in the process of organizing whole events for Dec. 17. A city hall press conference, a memorial ritual at Center for Sex and Culture, and “Naked Women Reading” sex worker writings (Lady Monster’s Event).

Start organizing now! You’ll be glad you did. The fact that sex workers themselves organize the Dec. 17 day creates good press interest (it has been in many papers including NY Times) and helps garner compassion and understanding of how the bad, unfair laws against prostitution hurt so many. But then sex workers of all kinds (legal sex work) can be targets of acts of violence as well.

PhillyUnsolvedMurders is focused on Philadelphia’s unsolved homicides. We think it is important that victims’ stories are told and not forgotten. — Read on http://www.phillyunsolvedmurders.com/cases/unsolved-murders-archive/unsolved-murders-2016/776-rickie-morgan-dc-16-26-035693 Rickie Morgan – DC#16-26-035693 On Saturday, July 16, 2016, at 11:20 p.m., Philadelphia Police Officers responded to the 2400 block of Jasper Street and found Rickie Morgan lying in the street. […]

On June 19, approximately 60 people demonstrated outside the Franklin County Court in Columbus, Ohio, demanding justice for Donna Dalton, who was kill — Read on http://www.liberationnews.org/family-community-demand-justice-for-woman-killed-by-officer-in-ohio/

Eventbrite – PJ Starr presents Pride Screening of No Human Involved (with Q and A) – Sunday, June 28, 2020 – Find event and ticket information. — Read on http://www.eventbrite.com/e/pride-screening-of-no-human-involved-with-q-and-a-tickets-109907811222 Join PJ Starr and friends for a screening of the film and online discussion. Pride week includes sex worker rights and prison abolition. Close out […]