Re/Posting of article by Brian Saady: December 17th 2016 officially marked the thirteenth anniversary of the International Day to End Violence Against Sex Workers. Most likely, you have never heard about this day if you live in the U.S. because the American media doesn’t cover this topic.  Poster design: SWOP-USA. Feature art: Crying Liberty copyright: Deborah Gross- Zuchman  www.deborahzuchman.com

NFL probably embodies American culture more than any other organization. Violence against women has become one the public relations priorities for the league due to the actions by some football players. Putting aside the NFL’s motivations, this public relations campaign will likely have some positive impact on society. However, there is one group of women who the American public isn’t particularly concerned with protecting — sex workers.

December 17th 2016 officially marked the thirteenth anniversary of the International Day to End Violence Against Sex Workers. Most likely, you have never heard about this day if you live in the U.S. because the American media doesn’t cover this topic. With that said, there were numerous news reports involving prostitution raids over the weekend. The U.S. media covers the issue of prostitution quite frequently, but the reporting is generally reactionary. In other words, these stories usually describe recent raids that include quotes from police officers and mug shots of the arrestees. On the other hand, the International Day to End Violence Against Sex Workers was only mentioned in one paid news publication, Providence Journal.[1] Otherwise, SF Weekly (a free alternative paper in San Francisco), bloggers, and activists were responsible for spreading the word. According to Rhode Island Future (a progressive politics NGO), there were 132 sex workers murdered this year and 53 of those victims in the U.S.

Ridgway was sentenced on December 17th and the International Day to End Violence Against Sex Workers has served as a memorial those victims, along with all other sex workers. It is also not a coincidence that SF Weekly covered this topic in the birthplace of the sex workers rights movement — San Francisco. That’s where an activist and former sex worker, Margo St. James, established COYOTE (Call Off Your Old Tired Ethics) in 1973.The Rhode Island Chapter of COYOTE filed a civil class action lawsuit in 1976 in the U.S. Federal District Court of Rhode Island. That lawsuit, COYOTE v Roberts, challenged the constitutionality of the state’s prostitution laws. In reaction to that case, the Rhode Island Assembly decided to reduce prostitution from a felony to a misdemeanor in 1980. In the process, they also accidentally created a loophole that decriminalized indoor prostitution. This loophole remained unknown to most people in the state until 2003 when some newspapers reported about this issue. The loophole, however, remained in place until 2009.

Thankfully, Bella Robinson, the current executive director of the Rhode Island Chapter of COYOTE, has been a vocal leader who is trying to bring about change. In fact, she served as an expert witness by testifying before the state representatives of New Hampshire when the state considered decriminalization earlier this year. Bella Robinson’s activism efforts undoubtedly prompted the Providence Journal to cover the International Day to End Violence Against Sex Workers. That recent report presented the human side of this issue in a non-sensational manner by reporting about the vigil held by Robinson and Elena Shih, an assistant professor at Brown University. Shih has conducted various studies demonstrating the adverse effects from criminalization for the human rights of sex workers. 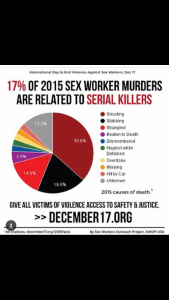 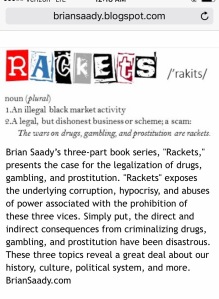 “Sex workers are subjected to police violence… forced labour, compulsory testing for sexually transmitted disease… humiliation and physical violence at these centres,” said Shen Tingting, director of advocacy and policy at Asia Catalyst, an NGO working with marginalised groups in the region. Abolishing this system is a “significant positive step,” she said. The arbitrary detention system will cease from December 29, and those held at “education centers” should be released immediately, state news agency Xinhua reported. There has been a public push to close the centres ever since China’s top legislative committee abolished its system of “re-education through labour camps” in 2013.

An Essex County (New Jersey) jury deliberated for just two hours on Thursday before convicting Khalil Wheeler-Weaver, 23, who now faces up to a life in prison plus 80 years.

Prosecutors said Wheeler-Weaver, of Orange, killed 20-year-old Sarah Butler, 33-year-old Joanne Brown and 19-year-old Robin West in 2016. They also accuse him of trying to kill another woman, identified in court documents only as T.T. who survived and testified against him at his trial. -Daily Mail Online